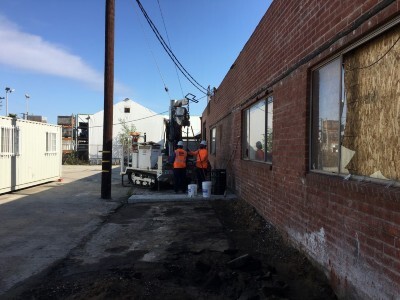 The RWQCB had previously approved a no further action (NFA) determination for vadose zone (i.e., soils) at the most severely affected parcel where excavation of nickel impacted soil and soil vapor extraction (SVE) had successfully been conducted. However, the RWQCB expressed continuing concerns in regard to four areas at and near the site:

CSC developed work plans for further soil vapor and groundwater evaluation which were approved by RWQCB. Soil vapor investigation was conducted in April 2020 and consisted of installing and sampling 45 vapor probes at 19 locations on-site. Most probes were set at 5 and 10 or 15 feet below ground surface (bgs). Two probes extended to 30 feet, and two other probes extended to 80 feet bgs. Pilot borings were advanced using limited access direct push rig except for 60-foot probes, which were drilled and constructed using hollow stem auger drill rig. Geophysical screening and Underground Services Alert notification were conducted prior to beginning any drilling. Additional utility clearance was provided by hand-augering the initial 5 feet of boring before using mechanized equipment. Temporary traffic control measures were implemented in high traffic areas at the active facilities. Macrocore or split spoon sampling was conducted to identify more transmissive intervals in which to place probes, however, soil types generally consisted of uniform very fine to fine sand.

The updated soil vapor study detected very low concentrations of various cVOCs across the site, to a maximum of approximately 4 µg/L. Results indicated a potential source for impact to groundwater is not present at the site. However, concentrations do suggest a potential for vapor intrusion, given the current conservative attenuation factor referenced by agencies of 0.03. The soil vapor report is currently under review by the RWQCB. Depending on their evaluation, CSC will develop potential mitigation measures that could be implemented at the site.

CSC also developed an Interim Remedial Action Plan (IRAP) for groundwater in the area immediately downgradient of the site. CSC proposed a limited, pilot-level approach to evaluate effectiveness of in-situ treatment with calcium poly sulfide (CPS). Introduction of CPS to the affected groundwater zone will modify the groundwater chemistry in that area from an oxidizing or transitional environment to a reducing environment, which will foster dechlorination of TCE. The IRAP is also currently undergoing review by RWQCB.