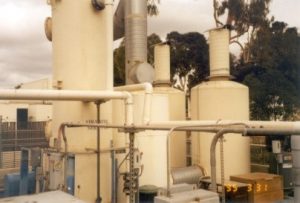 Cleanup was accomplished in a relatively short time frame by focusing the remediation strategy on hot spots and high-rate removal tactics to minimize plume spreading.

The chlorinated solvents, perchloroethylene (PCE), trichloroethylene (TCE), and hexavalent chromium (chrome 6) from the facility’s plating line were released to shallow groundwater beneath the process building.  Additional chlorinated solvents from an unknown source were also detected in groundwater below the product test stands and the chemical storage area.  Sampling determined that, in addition to the highly contaminated soil in the two production areas, two aquifers underlying the 22-acre site had been impacted by PCE and TCE at levels up to 120,000 parts per billion.

Localized hexavalent chromium contamination was addressed by chemically precipitating the chromium from extracted groundwater in an aboveground batch treatment system.  Chromium levels were reduced below the maximum contaminant level for drinking water and the batch treatment for chromium was been discontinued.

Remediation of the chlorinated solvents involved installation of groundwater extraction wells that are currently capturing contaminated groundwater from beneath the 22-acre site and pumping it to a centrally located treatment system consisting of an air stripper, liquid-phase carbon beds and vapor-phase carbon beds. Thirteen dual-phase extraction wells and seven air sparging points operate in conjunction with the pump-and-treat groundwater system to address the two areas of highest contamination.

The Santa Ana Regional Water Quality Control Board was the oversight agency for this project.  Staff involvement and on-going management of the remediation program facilitated a third party sale of most of the property.