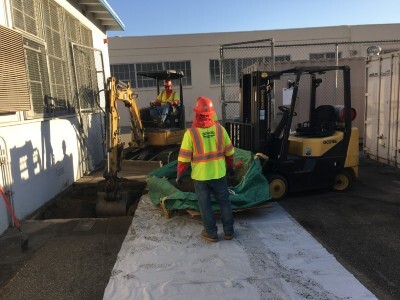 The PEA-E investigation consisted of advancing 119 initial soil borings across the site, using various drilling methods depending on depth and accessibility. An additional 33 step-out borings were installed at locations where concentrations of chemicals of potential concern (COPCs) exceeded preliminary screening levels. Fifteen soil vapor probes were also installed. Field sampling activities were conducted in 2016 and 2017. Subsequently, nine additional borings were installed to evaluate another area added to the scope of work. COPCs detected above preliminary screening levels included arsenic or lead identified in 17 individual locations.

The RAW defined arsenic and lead as the chemicals of concern (COC) at the site; respective clean-up values of 12 milligrams per kilogram (mg/kg) and 80 mg/kg were assigned. Evaluation of nature and extent of contamination determined that excavation and off-site disposal was the most feasible option to complete the removal action. The RAW also included planning for execution of the 17 individual excavations, determining removal and handling procedures including waste characterization, determination of confirmation sampling protocols, developing plan for air monitoring, and developing a Site- and Project-specific Health and Safety Plan (HASP).

Depths of excavations were anticipated to range from 1.5 to 3 feet below ground surface (bgs). Based on dimensions of excavations proposed in the RAW, approximately 72 cubic yards (in-place) of soil impacted with lead or arsenic were selected for removal. Approximately 64 cubic yards of soil from 14 separate locations were anticipated to be characterized as California regulated non-RCRA hazardous waste, and 8 cubic yards from four locations were characterized as or assumed to be non-hazardous in the PEA-E report.

The removal action was conducted in July and August of 2018, while the school was in limited summer session. CSC was the environmental consultant for the project responsible for observing and documenting removal activities; collecting and evaluating confirmation and waste characterization samples (including screening of all samples by x-ray fluorescence [XRF]); and performing air monitoring for airborne dust.

Excavations were completed using a combination of mechanized (mini-excavator) and hand-digging methods. All locations were cleared for utilities using geophysical methods. Hand-digging was conducted around all identified utilities. Excavation with a mini-excavator proceeded systematically and slowly accompanied by hand-digging, comprising a “surgical” excavation technique. Trees present at some locations were protected in place by hand-digging around the trunks and roots. Excavations were protected with temporary fencing during and/or following completion. Plastic sheeting was placed around excavations to contain any spilled soil and areas were promptly cleaned up after excavation. Excavated soil was placed into large capacity polypropylene bulk bags (“supersacks”) and transferred by fork lift to the staging area on the north side of the school, accompanied by flagman/spotter on foot. Soil was placed in steel roll-off containers pending waste characterization sampling and disposal off-site.

Five locations were deepened or enlarged based on interim confirmation sample results above action levels and XRF and/or laboratory analysis. A total of five locations had final confirmation sample results above action levels but could not be further enlarged due to lateral constraints from adjacent hardscape, buildings, and/or utilities.

Post-removal statistical analysis at the 95 percent upper confidence level of the mean was conducted for all final confirmation samples, indicating detections for arsenic and lead at the site overall were not statistically significant (i.e., effectively below action levels). However, arsenic and lead levels in the confirmation samples at one of the five locations were statistically significant at or above the action level. CSC recommended that complete removals be postponed until such time that the areas of concern become accessible.

Air monitoring results indicated that airborne dust levels at the site were maintained below allowable levels. Total volume of excavated soil was approximately 96 to 99 cubic yards (total volume based on excavation dimensions or volume back-calculated from disposal weight, respectively). Three roll-off containers were disposed of as California non-RCRA hazardous waste and six containers were disposed of as non-hazardous waste, based on results of waste characterization sampling. Excavations were backfilled or restored using well graded fill sand or 6-sack mixture sand-cement slurry. Removal action was completed on time and within budget.

We have been more than pleased with the service provided by Clark Seif Clark Environmental. This is our second contract with them and their professionalism is top notch. I can only hope they are the successful bidder on our next contract as well.

Just want to say Thank You.
Your lunch presentation was nothing less than awesome. Your professionalism, enthusiasm, and knowledge energized the class. We look forward to a continued relationship with you and your organization. Thanks again,

I just wanted to take a moment to say Thank You for on excellent presentation on Saturday.
My technicians and I were all very impressed by what we learned, and I received some very positive feedback from the other offices in attendance. Being in the water damage business, we are frequently faced questions about mold growth from water damage customers, insurance personnel and property managers. Your presentation, visual aids and handouts were well planned and targeted to our particular interests. I think we can now address the topic with a greater sense of confidence (and a little less guesswork!). I am sending copies of your presentation packet to everyone who attended along with request for feedback. Thank you again for a well done presentation. I look forward to working with you on future projects.

Wanted to take a few minutes to express our "thanks" for the wonderful presentation that Derrick Denis gave at our office meeting last month.
We had over twenty agents in attendance and they were all very impressed with no only the knowledge, but the informative way Derrick presented the material. The Mold Disclosure Issue is one of the most confusing that we as real estate practitioners have had to deal with in a number of years. Derrick made the confusion somewhat less on our part and gave us all a better understanding if just how we should present this problem to our clients. Again, thank you for having such a wonderful person representing your company. We would not hesitate to use or recommend your firm to our clients.

Thank you again for being part of the Los Angeles County East Chapter (LACE) luncheon program last week.
We greatly appreciated your understanding of our audience and what they needed to know. Both your presentation and responses to the participants questions were right on target.