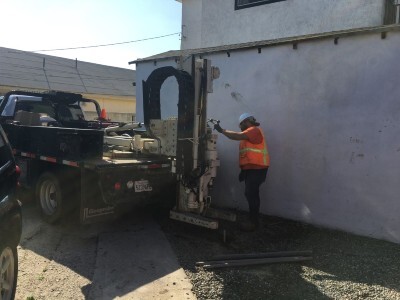 CSC conducted subsurface environmental assessments for methane in soil gas for various sites within the City of Los Angeles (City), including properties planned for redevelopment and school sites. The studies were performed in areas designated as Methane Zones and Methane Buffer Zones by the City Department of Building and Safety (DBS). Methane sampling and mitigation requirements were instituted by DBS after a devastating fire in the Fairfax area in 1986 caused by release of subsurface methane gas from former oil field wells, and expanded to other areas of the city following discovery of high subsurface methane concentrations (upwards of 500,000 parts per million by volume) at the Playa Vista development in West Los Angeles in 1999.

At a minimum DBS requires installation of at least two shallow soil gas probes at a depth of approximately four feet below ground surface (First Mobilization). If methane is detected in shallow probe samples during the initial mobilization, deeper probes are then required to be advanced to depths of 5, 10, and 20 feet (Second Mobilization). CSC has found that it is more expeditious to install both shallow and deep probe sets at the same time. Cost savings from performing only a single mobilization more than offset the minimal cost to install shallow and deep probes at the same time.

After equilibration, probes are purged. CSC measures the methane and oxygen concentrations using calibrated field instrumentation in accordance with DBS data quality requirements. If needed, hydrogen sulfide and carbon dioxide concentrations can also be measured simultaneously. Vacuum or pressure of subsurface probes is also measured, along with atmospheric pressure, to determine if site-specific conditions favor emission of soil gas from the subsurface.

In its report, CSC utilizes the methane concentration and probe pressure data to classify site parameters in accordance with guidance for mitigation measures established by DBS. These parameters determine mitigation measures, e.g., sub-slab liners, passive or active collection systems and trench dams, which must be incorporated into construction plans.

In addition to methane studies for new construction, CSC currently manages operation and maintenance (O&M) including monitoring at a Playa Vista school site. A gas mitigation system (GMS) was designed to prevent occupant exposure to unsafe levels of methane and hydrogen sulfide gas as well as vapors from remnant volatile organic compounds (VOCs) in interior and exterior areas at the site. The other goal of mitigation is to prevent accumulation of potentially flammable concentrations of methane.

Construction of the GMS was largely completed in 2012 and site occupancy was approved by the California Department of Toxic Substances Control (DTSC) in 2014.

CSC became O&M contractor for the site in 2015. O&M monitoring and reporting services are conducted by CSC professional staff on a quarterly basis. GMS components include three air injection blowers that are operated under a Permit to Operate (PTO) issued by the South Coast Air Quality Management District and are monitored on an annual basis in accordance with PTO requirements.

CSC prepares quarterly reports documenting results of all inspections, testing, and monitoring conducted, in addition to corrective actions that may have been undertaken. Reports include all checklists, forms, and other records, as well as laboratory data packages as applicable. Thus far, results of O&M monitoring indicate that concentrations of methane, hydrogen sulfide, and VOCs are consistently below site-specific action levels established by DTSC for school facilities.