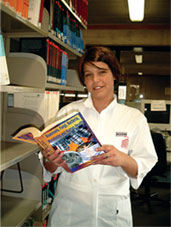 The increased concern over building wood structural damage caused by wood decay fungi has hastened the need for reliable and accurate identification of the cause, particularly Meruliporia incrassata (Poria incrassata), a water- conducting brown-rot fungus. Without the presence of fruiting bodies (basidiomata), positive identification of wood decay fungi based on the morphological characteristics of the vegetative structures is impractical and unreliable. In order to provide a rapid and accurate identification, the sequences of rRNA gene were used to develop genetic amplification and identification using real time PCR. Three sets of primer pairs and probes were selected and evaluated for specificity and sensitivity of detection. These primer pairs amplify only the DNA extracted from a pure culture of M. incrassata but not Serpula lacrymans, Serpula himantioides, Sistotrema brinkmannii and other wood decay fungi. In addition, samples collected from different residential buildings tested positive only if they were infested and decayed by M. incrassata but not by S. lacrymans. The results demonstrate that real time PCR analysis is an useful method for providing an accurate confirmation of M. incrassata infested wood and a fast detection system for monitoring, preventing and controlling wood decay.

Common water or moisture sources in buildings, which may lead to the development of this fungus, include water leaks and wood in close contact with soil infested by the fungus. One of the reasons for making this fungus very destructive is its ability to transport water for 50 to more than100 cm through mycelia fans, and mycelial strands or rhizomorphs, allowing it to transport water from the soil or other water sources to the wood (Verall 1968).

Merulioporia incrassata may produce a dry rot form of attack as do Serpula lacrymans and several wood decay fungi. However without the presence of basidiomata, identification of this fungus, based on morphological characteristics, is difficult and impractical. In indoor environments the basidiomata rarely develop on building materials. It is therefore necessary to develop a reliable and accurate method to identify M. incrassata without the presence of its basidiomata for its prevention and remediation.

The objective of this study is to develop species-specific primer pairs and probes for rapid and accurate identification of M. incrassata using real time PCR.

Sample process:Two methods were used for removing fungal cells from the wood/particulate samples. The first was a direct extraction from field samples. Briefly, the suspicious fungal structures picked off the wood or small pieces of decayed wood from field samples were added to extraction tubes for DNA extraction and purification as described. Another method was sample pooling. Briefly, a portion of each wood sample or various pieces of wood were selected and added to a 15 mL centrifuge tube containing 10 mL of 0.05% Tween solution. Tubes were vigorously vortexed to release fungal cells from the wood. The supernatant was collected and washed and the pellet was transferred to an extraction tube for DNA extraction and purification as described.

The ABI Prism 7000 Sequence Detection System and 5700 SDS (7000 SDS, 5700SDS; Applied Biosystems) were used for PCR analysis. With the use of Applied Biosystems reagents, the amplification conditions were as follows: 1X TaqMan master mix (with AmpErase Uracyl N-Glycosylase); 0.02 mg/mL BSA; 1 of each primer; 0.8 Probe and 5

Selection of sequence-specific PCR primers:Primer and Probe selections were performed by computing programs and by manual inspection of the aligned sequences. The sequence of Meruliporia incrassata for the ITS1-5.8S-IT2 was obtained from GenBank (GenBank accession # AJ419913) and compared against all other sequences on-line with BLAST. BLAST results revealed a high degree of sequence identity to other wood decay fungi in 5.8S but not in the sequence of ITS1 and ITS2 regions. To select the sequence-specific primers and probes for targeting M. incrassata using real time PCR (TaqMan chemistry), the available rRNA gene sequences of brown rot fungi were selected. The sequences of rRNA genes of the brown rot fungi, Meruliporia incrassata (Accession # AJ419912, isolateP261: Accession # AJ419913), Serpula lacrymans (isolateU.S.A.94: Accession # AF335276, isolate s27: Accession # SLA419910) and S. himantioides (Accession # SHI419911) were aligned to determine the sequence variations in ITS1 and ITS2. Four high variable regions were identified for the selection of primers and probes using Primer Express Software (Applied Biosystems). One set (MI-5) of the primers and probe was selected from the ITS1 regions with the amplicon of 99-bp (Fig. 1); the forward primer MI-86-105F (5′-GTGCTGGCCACCTTTATCTTG 3′), reverse primer MI-165-184R (5′-ATACGTCGGCGTGTGATGAA 3′) and the probe MI-119-143P (5′-FAM-ACACACACCAGTGCACCTGCCGTAG TAMRA-3′) in between. Two sets of primers and probes were obtained from ITS2 variable regions, MI-3 and MI-6, which produced amplicons of 71-bp and 98-bp respectively. The primers/probes for the MI-3 set are MI-496-514F: 5′-GTGTTGCCTCGGCGTGATA- 3′, MI-520-544P: 5′-6FAM-CGTCGTGTCTGGCGTGCAAGTAGGA TAMRA-3′, MI-548-566R: 5′-GACGGTTGTGGGCAAAAGG3′. Those for the MI-6 set are MI-366-391F: 5′-TGCCTGTTTGAGTGTCATTAAATTCT- 3′, MI-398-423P: 5′-6FAM-CTCCAATTCGTTTTGGACGTGGGCTT TAMRA-3′, MI-445-463R: 5′-AGCCGACCACACAAGGTCA-3′ (Fig. 1)

PCR performance and Primers/probes specificity: To evaluate the specificity and sensitivity of the primers and probes, MI-3, MI-5 and MI-6 were set up to amplify DNA extracted from the pure culture of M. incrassataand other wood decay fungi (Table 1). In conjunction with the fluorogenic nuclease assay and sequence detector, all three sets were able to amplify DNA extracted from the pure culture of M. incrassata as evidenced by the detected levels of fluorescence. Under the same conditions, those sets fail to amplify DNA templates from pure cultures of other brown rot fungi, S. lacrymans, S. himantioides and other wood decay fungi, Sistotrema brinkmannii (STL-P&L isolate 250), indicating the target specificity of the designated primer pairs and probes. Sensitivity of detection was tested with dilutions of M. incrassata DNA in order to select one set for further testing. We found that MI-3 was slightly more sensitive than MI-5 and MI-6 (data not shown). MI-3 was, therefore, selected for later tests. To determine whether cross amplification occurs, other fungal species were also examined. There was no PCR product observed using DNA extracted from those fungal species, which are most commonly found in water-damaged related indoor environments (Table 2).

To apply the PCR analysis to real field samples from environmental sources, we collected and tested the samples from residential buildings known to be infested/and decayed by M. incrassata, S. lacrymans or other wood decay fungi. The results showed that the positive fluorescence detection was only observed on the PCR reactions in which the DNA templates were extracted from the M. incrassata infested samples but not from S. lacrymans-infested samples or decayed wood infested by other fungi (Table 3). The results demonstrate that the primer pairs and probes used in the study can accurately and specifically identify the presence of M. incrassata from M. incrassata-infested wood.

A 1% weight loss of wood resulting from decay can lead to 50% loss in strength measured as toughness (Richards 1954). Proper diagnosis of early decay and the causative agents allow for appropriate remedial treatments to arrest decay prior to loss of structural integrity. Many techniques have been successfully developed for detecting wood decay and its causative agents. Those techniques include visual and microscopic examination (Wilcox 1964), culturing of fungi from wood (Nobles 1965), direct chemical staining (Eslyn 1979) and immunological detection (Goodell et al. 1986, 1988). The culture method is relatively simple, but is tedious and time- consuming. Advances in immunololgical detection methods held promise for detecting incipient wood decay, albeit the cross-reactivity of the reaction was noted (Clausen 1997). PCR is a nucleic acid technique based on amplification of a selected DNA sequence to levels that can be detected instrumentally. It is known to be very accurate, sensitive and reliable and is now a common practice for genetic identification, in addition to the traditional culture method.Real time PCR (with the use of a fluorogenic probe), on the other hand, not only increases the specificity and sensitivity of the detection but also provides a quantitative measurement for the detection. In this study, the designated primer pairs and probes have proven to be very accurate and specific in detecting the presence of M. incrassata in wood, indicating that real time PCR analysis is a very useful method to accurately confirm M. incrassata-infested wood.